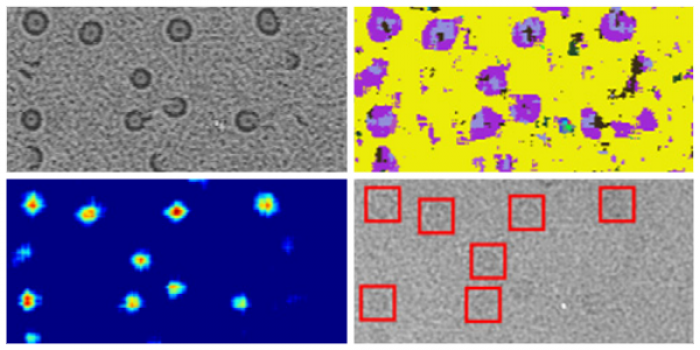 The goal of this study is to evaluate the performance of software for automated particle-boxing, and in particular the performance of a new tool (TextonSVM) that recognizes the characteristic texture of particles of interest. As part of a high-throughput protocol, we use human editing that is based solely on class-average images to create final data sets that are enriched in what the investigator considers to be true-positive particles. The Fourier shell correlation (FSC) function is then used to characterize the homogeneity of different single-particle data sets that are derived from the same micrographs by two or more alternative methods. We find that the homogeneity is generally quite similar for class-edited data sets obtained by the texture-based method and by SIGNATURE, a cross-correlation-based method. The precision–recall characteristics of the texture-based method are, on the other hand, significantly better than those of the cross-correlation based method; that is to say, the texture-based approach produces a smaller fraction of false positives in the initial set of candidate particles. The computational efficiency of the two approaches is generally within a factor of two of one another. In situations when it is helpful to use a larger number of templates (exemplars), however, TextonSVM scales in a much more efficient way than do boxing programs that are based on localized cross-correlation.